On the precipice: a week that defined the reality of live music in NSW - Six8 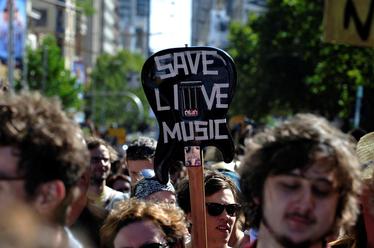 On the 1st Feb 2019, my founding partner responded to a piece from the ABC lamenting the state of the live music industry: How will live music survive. Just shy of two weeks later and we are once again confronted with the reality that, in parts of Australia, live music has been firmly seated in the dunce’s corner.

This week, I watched on in a mixture of confusion and horror as the NSW government announced new regulations for festivals within the state, which have been largely derided in the industry as draconian. Indeed, a number of high-profile festival organisers immediately announced it could spell the death knell for music festivals in NSW. Premier Berjiklian was quick to assure us that this would not affect the ‘low-risk festivals’ such as the Byron Bay Blues Festival – despite the fact that Bluesfest was deemed high risk under the new regulation’s point system. Perhaps I’m cynical in suggesting that this particular festival is widely attended by a demographic important for the upcoming state elections – or perhaps the government is just confused by its own policy, either seems equally likely at this stage of the game.

With the considerable dust kicked up by this story, it was easy to miss the release of Deloitte’s report on Sydney’s Night Time Economy. The report concluded that the city is missing out on a whopping $16bn a year due to an “underdeveloped night-time economy” which has been, at least in part, the result of poorly designed lockout laws and regulations devastating the live music sector – a view echoed this week by former Lord Mayor Clover Moore.

In short, it’s been a week of beatings for our industry.

So, once again the team here at Six8 feel compelled to raise our voices and join in with the thousands of others across Australia calling for some sense. Our message is clear and consistent and this time it is directed at Premier Gladys Berjiklian and the NSW Government.

Stop implementing poorly considered and rushed policies that threaten thousands of livelihoods, millions of dollars to the economy, and most importantly our cultural lifeblood. Engage with those in the music industry and learn from other states and countries. In particular, those that have found solutions that support safe areas for live music without sacrificing their local culture.

With each botched policy, and each poorly considered regulation we see yet another generation of kids coming to the terrifying conclusion that becoming a musician is not a viable profession – let alone one our society really gives a damn about. Think I’m being overly dramatic? Well it’s already happening.

Live music is and has always been part of our Australian culture. It is a way of gathering together with old friends and new. To share stories, to celebrate, to mourn, to laugh, to cry, to find meaning in pain, or just to come together and dance while singing dodgy lyrics. In a day and age where we are becoming more reliant on our computers, phones and tablets for distraction, we need to protect the outlets we have to connect with one another. Live music is a bastion of social interaction, it is a personal medium in an age of screens, and it’s one that any generation can understand and relate to.

To our supporters, we must hold hope. We’ve seen this before, albeit in a different context. On the 17th January 2010, Melbourne took to the streets with the SLAM rally. Forcing Victorian Government to sit up and take note of the emotional, cultural and economic benefits that Live Music provides. Since then there has been a long journey of political action and support for the sector in Melbourne. This has led to the city now being considered the greatest live music capital in the southern hemisphere; and by some metrics the world. With live music assessed as “the heart of [Melbourne’s] social and cultural life” and a “significant economic generator”.

So now it’s NSW’s turn. The birthplace of so many of Australia’s live music icons is in trouble and we need you to help. I encourage all of you to take a stand. Let’s tell the powers to be how damn important live music is to us. Get your friends and come join me at the Don’t Kill Live Music Rally – Sydney on Feb 21st. The rally details can be found through the Facebook event page or by connecting with me directly at keith@www.six8.com.au. Either way, I thank you all for standing up and taking a stance on keeping NSW connected through a safe and thriving live music culture.  As always, we will work with any government or legislature that wants to reach out to us and help build a better more vibrant live music community.